The ETB took part in the open-air show of the Kleine Jorker Bühne on June 27 in Jork.

We put - quite successfully - "A Talk in the Park" from Alan Ayckbourn's "Confusions" on stage.

The ETB was taking part in the "British Days" of the VHS Buxtehude from Oct. 11 to 25.

with two scenes of Alan Ayckbourn's series "Confusions": "Mother Figure" and "Talk in the Park".

Lucy is a mother of two, a house-bound wife who rarely sees her husband Harry and has reached the point where she barely bothers to look after herself as so much of her time and attention is centred on the children. Not answering the phone or the door, neighbours Rosemary and Terry come round with news that Lucy's husband Harry has been calling and is worried at not getting a response. So used to dealing with nothing but children, Lucy proceeds to treat her visitors as children. Terry's attempts to engage in conversation highlight the cracks in his own relationship and he upsets Rosemary. 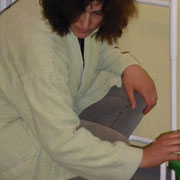 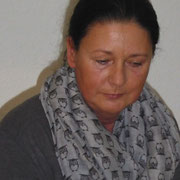 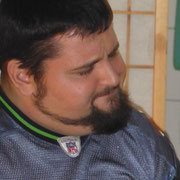 "Talk In the Park"

Four people are sat on four park benches in a park. Arthur asks if the seat by Beryl is empty. He proceeds to talk and Beryl moves to the next bench because he won't stop talking. She sits next to Charlie and begins talking about her abusive husband leading Charlie to move away and sit next to Doreen to start talking about the state of his life. Doreen, believing she is about to be attacked, moves to sit next to Ernest and begins talking about her fears and her dog. Ernest creeps away to Arthur, bemoaning the fact this woman started talking to him and telling an unconcerned Arthur about his life. This turns into a round as each person tries to get the attention of the person next to them, who ignores them leaving Arthur to note, 'might as well talk to yourself.' 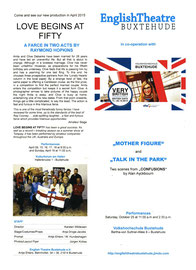 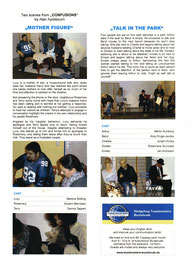