Very successful premiere at the Kulturforum

Our premiere of "World without men" and "Socks go in the bottom drawer" at the Kulturforum on Friday, 19 was a tremendous success.

The venue was completely booked up and the audience obviously enjoyed the show a lot. There were laughters and cheerings throughout the whole plays and an almost never ending applause at the end.

The group is looking forward to the next performances. 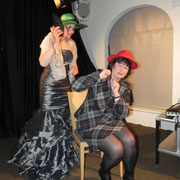 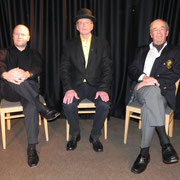 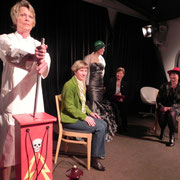 „Karsten Wildeisen“, not exactly the name you would expect for the director of an English drama group, but if I tell you that my mother´s maiden name was “Mitchell” things become clearer. I was privileged to spend my boyhood in one of Europe´s most beautiful cities: Edinburgh and I see myself as Anglo-German or alternatively Germano-British.

I spent more than 40 of my 72 years teaching English at a Hamburg “Gymnasium”, I mean a grammar school of course, not the sort of place, where you lift heavy objects… but I still had enough time to pursue other interests particularly amateur dramatics, so to be voted stage director in the charming town where dogs bark with their tails is very appealing to me.

With its last performance on Sunday, April 22 the ETB finished this year's series very successfully. All shows were more or less booked up. On Friday night we even had to send several guests home because we really couldn't squeeze them into the Kulturforum at all.

Come and join us again next year!

Emer Lettow hails from the Irish harbor city of Cork

As a member of the Montfort Stage school in her hometown she had numerous roles in theatre, dance and choral productions and revues at The Cork Opera House and Everyman Theatre, among others, from a young age.

Taking part in the London Academy of Music and Dramatic Art (LAMDA) annual graded examinations in Acting and The Speaking of Verse and Prose, Emer achieved Silver Medal status before having to temporarily lay aside her acting aspirations in favour of her Arts Degree.

However the drama continued at University College Cork where her studies included classes in European Drama and she played in a number of The Dramatic Society’s productions, among them Timberlake Wertembaker’s "Our Country’s Good". It was here that a fellow cast member caught her eye and managed to whisk her off to Germany, where she was involved in the University of Oldenburg English Theatre’s production of Brian Friel’s "Translations" and played Cecily in Oscar Wilde’s "The Importance of Being Earnest".

Having moved around a lot in recent years and only been involved in short theatre projects in Osnabrück, she is delighted to be given the opportunity to “be let loose on” the English Theatre in Buxtehude.

"Thank you and good bye, Gwenda!"